On Saturday, May 14th, 2022, a packed house enjoyed what many in the audience said was the best concert they had seen at The Mary Webb Centre for the Arts in Highgate.  From the first song, the band had everyone in the crowd fully engaged.  For those of my age, we had been listening to the Eagles for several decades, so we recognized every song and could sing along. Hotel California, Lyin’ Eyes, Take it Easy, Desparado and Life in the Fast Lane to mention a few.

The band was energetic and connected with the audience for the whole concert.  The drummer, Jay Riehl had a wonderful voice and sounded just like Don Henley while doing an amazing job on the drums.  Stand-in bass player and singer Mike Ferfolia appeared to have been with the band forever.  The two guitar players Al Langlade and Mike Dimoulas played both electric and acoustic guitars, as well as singing backup or lead.  Mike also played the Talk-Box, which allowed him to alter an audio signal from his guitar using his mouth to shape different sounds.

When the group played “Hotel California” (the song the group is named after) Mike played a double neck guitar, one with a 12 strings and one with 6, to achieve the unique sound that is so famous.  Mike started the band in 1986 when he heard the Eagles and thought that he should get some fellow musicians together to play Eagles songs.  The band Hotel California is rated the best Eagles Tribute band in the world, and plays all over the world.

When the band finished their second set, they didn’t leave the stage but asked who wanted to hear one more or better yet, two more songs.  The answer from the audience was a very loud and enthusiastic YES! In talking to the band after the concert, both the band and those left in the concert hall were both in agreement that they come back to TMWC, soon! 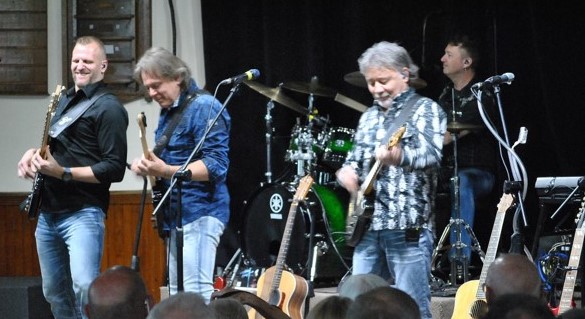