On Saturday, Dec. 11, 2021, on a cold and windy night, folks from all around Southwestern Ontario ventured out to the Mary Webb Centre for the Arts in Highgate ON to hear a wonderful concert by jazz singer/song writer Molly Johnson and her stellar trio.

Highgate was the first stop in a December tour of southern Ontario and into Quebec that includes stops at the newly renovated Massey Hall in Toronto and the National Arts Centre in Ottawa.  Johnson is promoting her new album “It’s a Snow Globe World,” and she performed songs from her album as well others by artists such as Billie Holiday, who Johnson says had such a strong influence on her career.  Several Christmas songs were done with more of a jazz touch, giving them quite a unique sound.  Throughout the concert, Johnson told stories about her career, what gave her ideas for her songs and with whom she often collaborated.  She also shared the stage with her trio, letting them shine. They are all truly talented musicians adding so much to the concert.

Johnson has a somewhat enthralling sound, somewhat melancholy at times and she admitted to writing a lot of sad songs.  She mentioned that she and her bass player have played and written songs together for some 30 years.  She also sang a song written just for her by her drummer, a very touching moment during the concert.  Johnson lives in a small town on the shores of Lake Ontario and feels that she has an understanding of life in small communities.

Overall, it was a great concert, with the audience giving her a standing ovation at the end.  Having heard Molly perform in person, it is no wonder that she has been called one of Canada’s greatest voices and has performed all over North America and in Europe.  Well worth the trip out in the crazy weather. 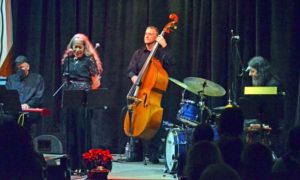