Myles Goodwyn put on a wonderful show for those lucky folks able to join us at The Mary Webb Centre for the Arts in Highgate. Accompanied by his long-time friend Jim Henman and another fellow Nova Scotian Paul Eisan on bass guitar (who never stopped smiling), Myles led us through his more than 40 year career. He started playing in a high school band called Woody’s Termites and went on to forming April Wine with his buddy Jim and several others. That band achieved amazing success in Canada and all over the world.

Myles has a great sense of humour and he described his early life in rural Nova Scotia where his family lived on a farm with no power or running water. Many in the audience had similar situations, based on the number of heads that were nodding as he talked.

Myles’ voice has not changed in all the time he has performed, whether it was singing country songs, April Wine tunes, blues or spiritual songs. One of the earliest influences he had was country singer from the 30s Jimmie Rogers and the first song that Myles sang was one of his songs, which even included a bit a yodeling. He and Jim sang a beautiful Everly Brothers tune and all three continued to sing a great variety of songs.

Myles told several stories about April Wine’s journey, including one about an album being recorded in Richard Branson’s studio in England. Myles also mentioned that he wrote about 80 % of the April Wine songs.

More recently, he has written and produced 2 blues albums and sang several songs from those albums. His guitar playing friend Jim had started writing a song about children killed at a school and when the graves of the children at the residential school were found in Kamloops, he and Myles finished the song and they sang it to a very quiet audience. Myles said that he is not religious, but would consider himself to be spiritual. He sang his song “Will the last voice I hear be an Angel”, another very touching song.

Myles and his fellow musicians put on a truly amazing show, one that rewarded the audience with an encore after a very vocal standing ovation. It was very impressive how 3 people can put forth such an overpowering performance.

There are no concerts over the summer. The 2022-23 season begins with Good Lovelies on Sept. 9th and Jim Cuddy on Sept. 30th.  Follow us on marywebbcentre.ca. 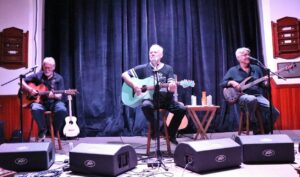