It was no April Fool’s joke as the audience at The Mary Webb Centre were treated to a wonderful concert by Roxanne Potvin and her backup band of Tom Juhas – electric guitar maestro, Marshall Bureau – drummer extraordinaire and Steve Pelletier – smooth bass man.

The band’s performance was all that more amazing as they had never played with Roxanne before this concert which certainly was not obvious.  After a five year break from any recording, Roxanne recorded her new album, “Dreaming”, doing most of the production of the album herself. Telling us the story behind why she wrote each one, Roxanne sang many of the songs from “Dreaming”, as well as playing other great songs from her previous albums.

After a stint in Nashville at a recording studio, Roxanne now produces her own material, often singing the background vocals for each song. She sang some songs playing solo on her acoustic guitar, with recorded background vocals she had already done.

Overall, it was a wonderful concert, one that earned her a standing ovation that prompted Roxanne to perform a few more songs. 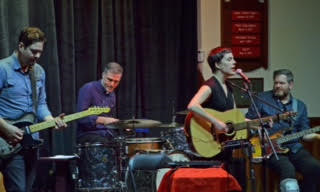 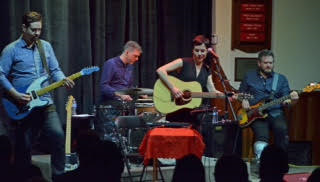