The Ennis Sisters, Karen, Maureen and Theresa, returned to the Mary Webb Centre on Saturday, Dec. 2nd to a sold out and very appreciative house.  As it says on their web-site, “there was just no escaping the Irish Newfoundland, traditional music growing up” and those lucky enough to be at The Mary Webb Centre got to hear the unique results of that upbringing.

The sisters sang a variety of Christmas tunes, many a compilation of several of their favourite songs from their years growing up in Newfoundland.  Their harmony on every song was absolutely wonderful. Accompanied by the very talented Mark Murphy and Colin Savoir-Lavac, who each sang one of their own songs, the Ennis Sisters cover an amazing range of music.  Maureen and Mark, who has been with them for some 20 years, have also written many songs about their time in Newfoundland. Karen, who continually in good fun reminded us all that she was the middle sister, the best looking and most talented, told many extremely humorous stories about their youth, and how she and Maureen made Theresa’s life somewhat painful.  She recited an ode, written by her and her husband, about a true story from 1986, of how she and Maureen had caused their younger sister Theresa some bodily harm that had many in the audience in tears from laughing so hard.  Karen and Theresa also broke out into energetic step dancing during several of their songs.

It was a truly amazing performance, with members of the audience coming from as far away as Toronto to be part of this wonderful experience. Concerts closer to home were also sold out.  Two long standing ovations were a testament to how much the audience loved their concert. 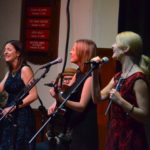 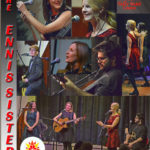