On Jan. 14, a full house was treated to another wonderful evening of entertainment at The Mary Webb Centre’s 2nd Annual Local Talent Night, sponsored once again by McKinlay Funeral Homes.

Jacklyn Wills, a 16 year-old from Dresden, started off the evening. Playing her guitar and accompanied by Rod Reynolds on percussion, Jacklyn sang several of her own songs plus a few by other artists, finishing off with a very nice version “Landslide” by Stevie Nicks. An excellent performance by this young singer/songwriter and a wonderful beginning for the evening’s festivities.

Tina Pumfrey from Thamesville, with band Del Metcalfe on guitar, Jim Brown on bass and Eugene Metcalfe on drums, all of whom have been together since 2014, were up next. Tina started writing songs about 10 years ago, and while playing keyboard, she sang a variety of songs about events and folks in her life, while in between each song talking about what inspired her to write that song. A very well received performance.

Cliff Trudgen, from Ridgetown and his band of cloggers, April Winch, Gus Croteau and Mollie Croteau, all from Sarnia were our 3rd group of performers.  After the stage was cleared, they performed several sets of clogging, which were very energetic and had the audience clapping along with them. In between numbers, Cliff, who has been clogging for 25 years, explained what clogging was all about and mentioned that he gives lessons both in Ridgetown and Sarnia. He left a brochure with the appropriate times and locations for those who may have been bitten by the clogging bug.

Freshwater took to the stage after a short intermission. This versatile duo from Ridgetown, Rocky West (originally from Manitoulin Island) and Gail Horwitz (originally from Brooklyn, N.Y.), sang Rocky’s songs about their travels across Canada and the many sites and problems they have seen. Rocky played 12 string guitar and sang in a rich baritone with Gail beside him adding harmonies and percussion. They are passionate about their music, which was obvious as soon as they started singing.

Ron Bolohan, accordionist from Ridgetown, was the last musician to perform. After clearing up with much humour some of the perhaps misleading information in some of the ads for this evening, (ie he is not retiring!) Ron proceeded to amaze the audience. Many of us can only dream of being able to have both hands move as quickly and beautifully over the keys of his accordion as Ron does. As did the performers before him, Ron gave us a brief look at his career playing the accordion. His final version of “Ava Maria” earned him a standing ovation.

As an added bonus, before closing out the evening, MC Peter Garapick invited Cliff and his cloggers back up on stage where they clogged along to Ron’s playing of a few short songs. A truly great way to end this very entertaining evening. 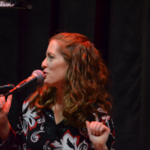