After quite an absence, on Saturday evening, May 28th 2022, singer-songwriter Danny Michel returned to The Mary Webb Centre for the Arts to put on a wonderful concert for the full house. Mixing his songs with great stories about his journey through life as a song writer, Danny entertained the audience with a wide variety of tunes. Switching back and forth between two vintage guitars, an electric guitar and an acoustic one, Danny played songs from several of his albums.

He has been all over the world, playing for many different celebrities and audiences. He told us of the very amusing story of playing at Jane Goodall’s 85th birthday party and how he met her before the concert. He heard about the first Italian astronaut, Samantha Cristoforetti and quickly wrote a song about her, “Samantha in the Sky with Diamonds”. He showed the song to his friend, Canadian astronaut Chris Hatfield. Chris thought that it was great and immediately sent it to Samantha, who was in the Space Station. She also liked it and emailed Danny to thank him for the song. Danny was amazed that he now had an email friend who was in space.   Danny spent 18 days on a Russian icebreaker in the NW Passage and wrote songs for an album while on the ship. He mentioned how nice the crew was and what a great trip it was.

In between stories, Danny sang a wonderful array of songs, covering many topics. He also sang a great Bob Dylan song, where he tried not to switch his voice to a Bob Dylan voice. Lots of fun. He is an extremely talented singer and musician and it certainly appeared that there were many in the audience who had travelled a distance to see him and were certainly glad that they did. It was an extremely entertaining concert and one that the audience liked well enough to give Danny a standing ovation for him to return on stage for another song. It was interesting to hear that Danny had several of his albums, both on CD and LP, downstairs in the art gallery and trusted those who purchased any to e-transfer him the money as he didn’t want cash. He had a sign that the buyers could photograph with the email address. That was pretty nice.

This concert was sponsored by Darrin Canniff and family. Our thanks to Darrin who attended the concert. 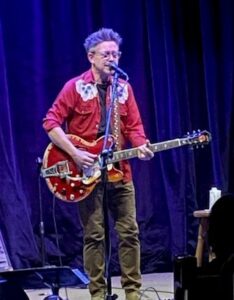