Another  great concert at The Mary Webb Centre for the Arts on Saturday, Nov. 3/18.

The Winnipeg trio Sweet Alibi, with backup on bass and drums, sang a wonderful collection of their own songs off their 3 albums, as well numbers from greats such as Fleetwood Mac, Tom Petty and Bob Dylan.  In addition to their wonderful harmony, all three are also very accomplished musicians.  Throughout the concert, both Amber and Jess talked about their journey through their music careers:   Amber’s inspiration and therapeutic healing from writing music after her mother’s death on Nov. 11 a few years ago plus Jess’ addictions to among other things, jewellery.

After the standing ovation they received, Michelle, Jess and Amber came back on stage to sing an amazing song a cappella to another rousing ovation.  Before leaving, Jess continued with her love of jewellery with the purchase of two sets of necklaces and earrings from the art gallery at TMWC.  She and Amber also purchased prints by this month’s feature artist, Charlene McGill, who is at The Centre on Saturdays painting and selling her art and others’ plus tickets for future concerts. 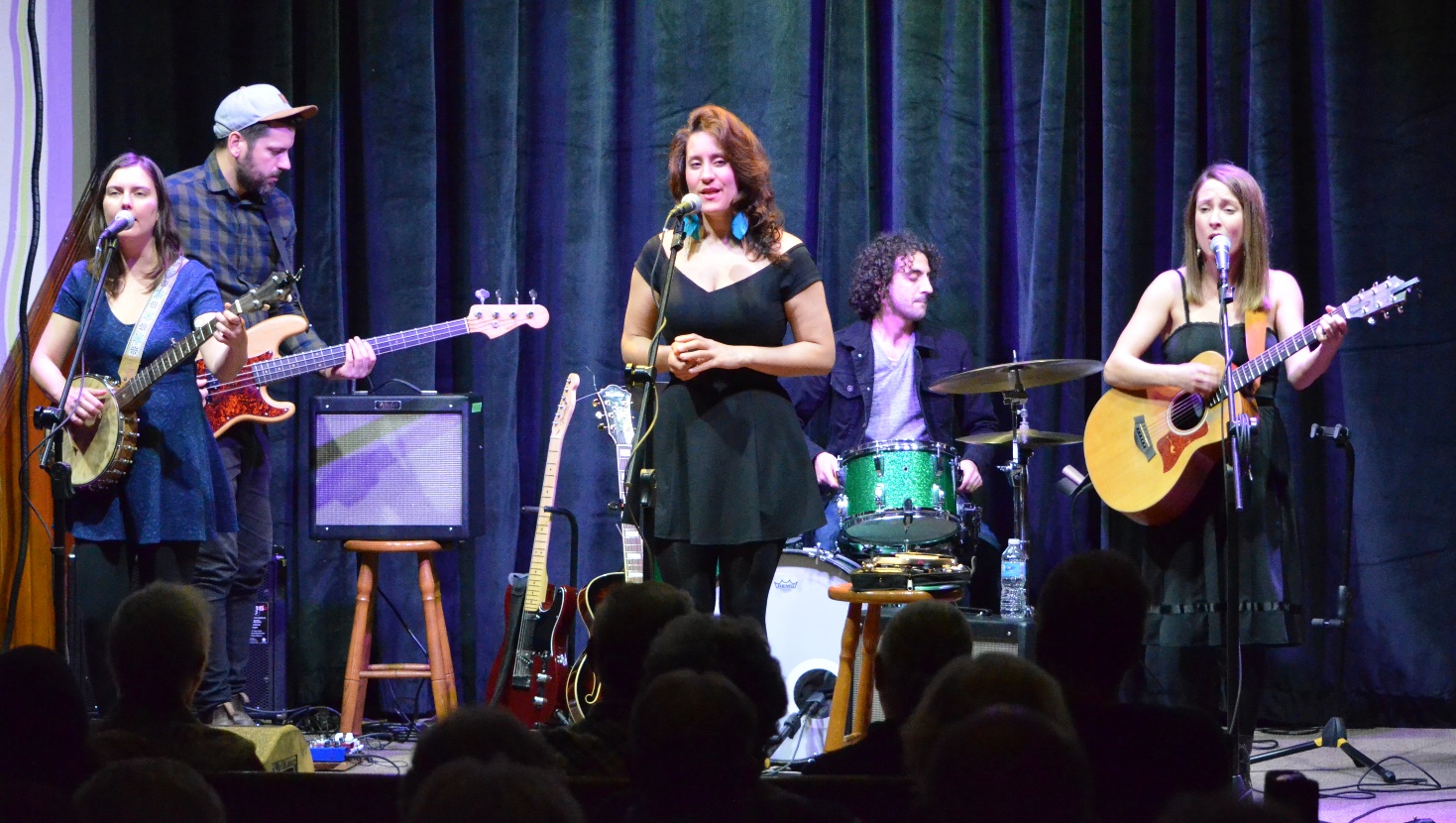 Western Canadian Music Award Winners, Sweet Alibi, have been captivating audiences across Canada. The Winnipeg-based folk/pop band infuse their signature harmonies with influences of everything from folk to country to soul, without a hint of shame. Sweet Alibi’s Jess Rae Ayre, Amber Quesnel, and Michelle Anderson share personal experiences that are genuinely felt in song. Tom Power of CBC Radio 2 describes the band: “If Mumford and Sons and the Supremes had a love child you would name it Sweet Alibi”. Audiences have been raving nationwide for their performances at Winnipeg Folk Fest, Juno Fest, Canada Day in Ottawa, International jazz festivals, and many concert series. Currently you can find the band touring their new material from their CFMA/WCMA nominated release We’ve Got To (produced by Rusty Matyas of Imaginary Cities).

“Heartfelt lyrics and that intangible quality that often catapults a band into stardom. In 2012 they were nominated for best vocalist at the Canadian Folk Music Awards–future nominations (and wins) seem destined–and recently they were a featured band at the Junos.”- Chaka V., The Winehouse Mag,

“Sweet Alibi are quite an amalgam of textured harmonies and diverse sounds on this award-winning latest album. At times, traditional, and on occasion sounding like they could be playing on a pop radio station. Both of their albums are available in iTunes, in case you were wondering…” – Calgary Herald

“It’s a trio of women who can just as easily channel Adele as cover Woody Guthrie.” – Amanda Putz, CBC news

“What a wonderful thing to come upon this band after listening to submission after submission of top-40 wannabees! Vocal harmonies that will stop you in your tracks, and solid musicianship from three women who really seem to have their act together.” – Candace, Secret Frequency