On Saturday, Mar. 19, 2022, The Mudmen got the Mary Webb Centre back into the concert business with a bang.  The band’s name comes from the “founding members” Campbell Brothers’ occupation prior to forming the band.  They were mixing mortar and carrying bricks for bricklayers.  The kilt wearing, bagpipe-playing, amazing musicians raised the roof at The Mary Webb Centre.

The band’s music is influenced by traditional Scottish music, as well as hard rock groups such as AC/DC.  The Mudmen have opened for many well-known bands, including ZZ Top, Tool, Dropkick Murphys and Bowling for Soup, as well as fellow Canadians Nickelback, Sum 41 and The Guess Who.

This concert was not for the faint of heart as it was totally exciting, rowdy, raucous and loud but sound tech Joel Morningstar had the band dialed in and together with the renowned Mary Webb Centre acoustics the audience enjoyed a voluminous but clarity of note show!  The band actually brought earplugs for the audience!

They were foot stomping, hand clapping, dancing in the aisles concert.  The audience, many of whom wore kilts and plaid, gave The Mudmen a standing ovation for a wonderful evening of enjoyment.  A great way to start off our 2022 spring concert schedule. 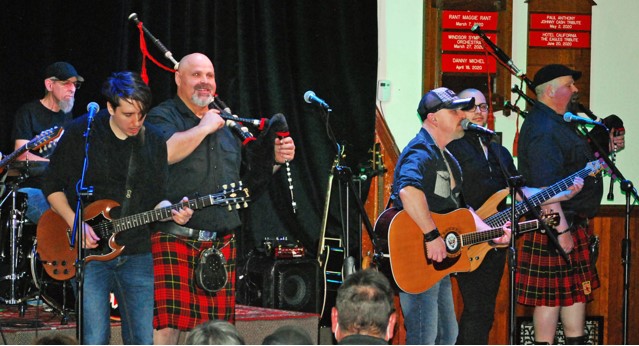