On Saturday, May 6th, the full house at The Mary Webb Centre were treated to an absolutely wonderful concert by Valdy, a self-described folk singer, of legendary renown.  Valdy’s humour, guitar magic on a guitar that he has been playing for over 50 years, his storytelling and singing were truly awe inspiring.  Valdy continually gave us the inspirations for the stories he tells in his songs such as the one about Stompin Tom Connors after his death and his song for a children’s choir in Victoria for Canada’s 150th Birthday.

Valdy described himself as a Highgate “virgin”, having never been there before, but he described the acoustics at The Mary Webb Centre as better than those at Massey hall in Toronto, high praise from a singer who has travelled the world for over 60 years. We hope that he will return. The best part of watching Valdy perform was his obvious joy in what he was doing which his wife, who accompanies him, agrees with. He sang some of his well-known classics, some songs by other Canadian singers plus many of his new works, just so we’d know what he’d been up to lately!

The full house included many regulars plus folks from surrounding towns as well those who travelled to Highgate just to see Valdy.  Many were so impressed by The Mary Webb Centre, we hope that they will return.  Valdy commented that it was great to see kids bringing their parents and grandparents out to a concert! 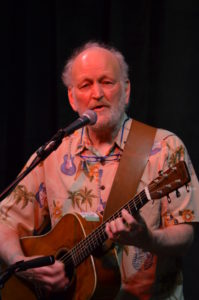